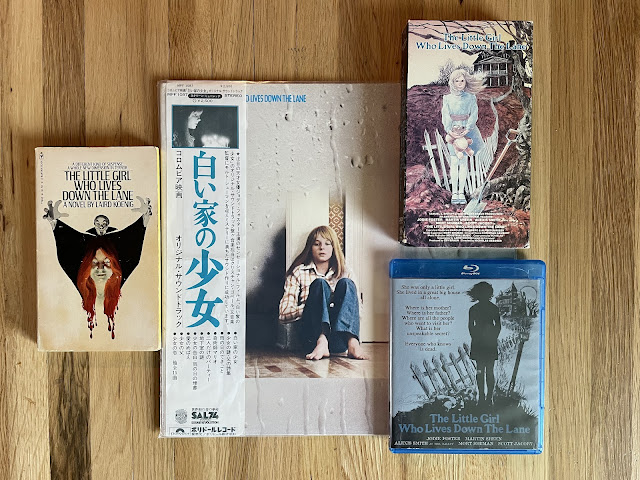 We all have beloved movies that take us back to a very specific time in our lives, being either the first time we saw it, or some connected event surrounding it. This underappreciated made-for-TV movie is very near and dear to my heart. I have a delightful, vivid memory of watching this on TV while carving a jack-o-lantern by myself on a cool Fall evening in the late 70's. You may not immediately consider this a Halloween film, but the first scene does indeed open on Halloween night.
The film is of course based on the book of the same name by Laird Koenig, who wrote the screenplay as well. This is why the book and film are so wonderfully similar, one of the few that are so similar--another one being Rosemary's Baby.
For the longest time, The Little Girl Who Lives Down The Lane was only available on VHS. It wasn't until 2016 that it finally arrived on Blu-Ray, and it comes with reversible artwork which is an uncommon bonus. I only recently watched it on BluRay for the first time, and wowie what a special treat! Also realized that my VHS copy must be an edited for television version because this was the first time I'd ever seen the naked part. Tastefully done, so it didn't bother me. The interview with Martin Sheen in the bonus features is worth the price of admission alone. An excellent rendering of one of my most beloved Halloween films. 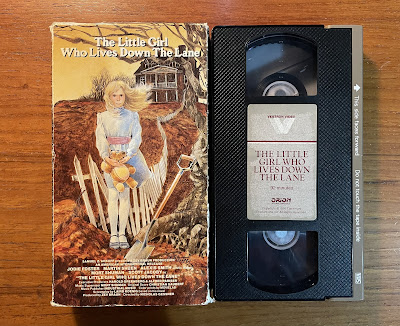 Speaking of VHS, I have this extra copy available for purchase for $25 shipped within the US. Payable via the links below. The original box has moderate edge wear/clear tape only. Original tape in very good condition. Play tested, plays perfectly. RARE!
PLEASE NOTE: VHS tapes can be temperamental and play well on one player and not so well on another. For this reason, all tapes are sold AS-IS and are not returnable. However, I will always do my best to play-test each one for sound and playback quality. 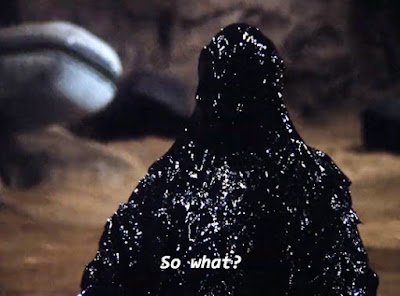 Before we acknowledge the elephant in the room, let's address the episode equation. If you count S1E1 (the pilot) as one episode, Skin Of Evil is indeed E22. If you consider the two-part episode as two separate parts, then this would be E23. As I streamed it on Paramount+ and the first episode was one continuous episode, I consider Skin Of Evil E22. Right. Onward.

"Save your pity for yourself!"

Skin Of Evil is hands down my #1 favorite episode thus far into the series. *spoiler alert* Most consider the unexpected death of Lt. Yar as being the point of contention of this episode, but I have never been a big fan of Denise Crosby, so I never really warmed to her character. Armus, the big black goo monster, is definitely the highlight for me. I couldn't help thinking how this is a perfect mash-up of Stephen King's The Raft and Star Trek. He's not evil, he's just lonely and bored! He's cranky and just wants to be entertained. He can't help it, he's made out of pure negativity after all. But the way the voice is articulated, (and those screams!) I couldn't stop giggling throughout all of his scenes. Hee-larious!

If you want a rational and somewhat technical explanation of this episode, have a look at this You Tube clip:

Ok so I love Roger Corman films just as much as the next horror fan, but wowie was this a stinker. Basically an Alien ripoff, but you know, with more sex and nudity. Which is fine, it just didn't translate very well, and the acting is pretty bad. But there are three reasons to watch it if you haven't seen it yet;
1. Our leading sexpot is June Chadwick, whom I adore in Spinal Tap as Jeanine.
2. A brief part for Michael Bowen, our beloved bad boy in Valley Girl, Jackie Brown and countless other favorites.
3. The soundtrack/score. Albeit brief, it's a delicious synthy/experimental romp and worth a listen on it's own merit. It's so of it's time, not a "sounds like the 80's" soundtrack that we hear today--which is fine, don't get me wrong--it's just that this is the real deal.
Perhaps if the creature looked anything like what is on the wonderful cover art, this would be a better Sci-Fi/Horror flick. 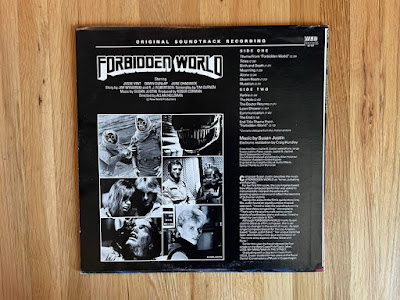 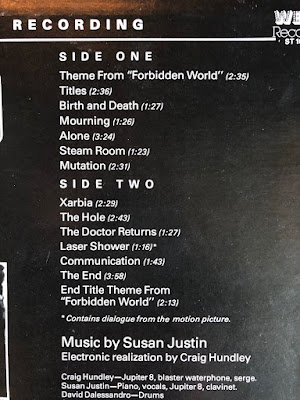 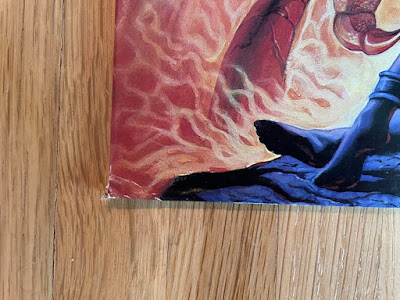 This copy is available for $50 shipped within the US, payable via the Paypal links below.
Condition:
Cover has mild edge/surface wear/light corner bump only. Original inner sleeve in good shape. LP is a clean VG++ with just a few superficial surface/storage marks--plays perfectly. Comes in a new poly outer sleeve. SUPER RARE!

Records are stored upright in my smoke and pet free home, and shipped in proper LP mailers with cardboard mats to ensure a safe delivery.
Be sure to visit my Etsy Vinyl Shop for many more titles available.
at Thursday, April 21, 2022 No comments:
Email ThisBlogThis!Share to TwitterShare to FacebookShare to Pinterest
Labels: 1980s, Sci Fi/Horror, Soundtracks, Vinyl Records 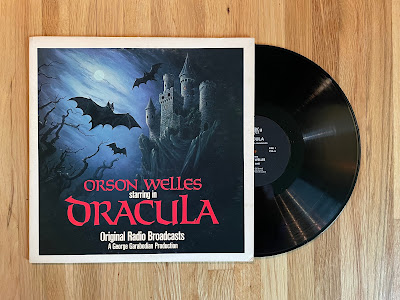 Talk about a blast from the past! This fantastic (and rare!) album is a recording of an original radio broadcast from 1938. Prominently featuring Orson Welles in the role of Dracula and Dr. Seward, there is no denying his voice talents along with fellow actors like Agnes Moorehead (Samantha's fabulous witch Mother on Bewitched) playing the lovely Mina. Oh how I would love to have seen this live... 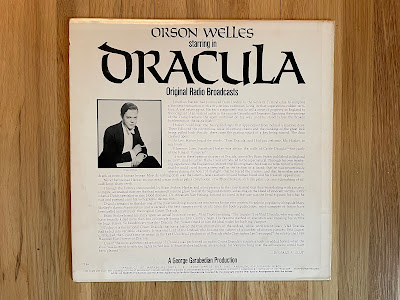 This adaptation of Dracula was the first episode of the CBS Radio series The Mercury Theater On The Air which was broadcast at 8 pm ET on Monday, July 11, 1938. There is something rather special about listening to a 1930's radio performance via a 1970's vinyl record. It's one of the reasons I specialize in vintage items in the first place, it's just another way of keeping the past alive. Be sure to visit my Etsy Vinyl Shop for many more titles available. 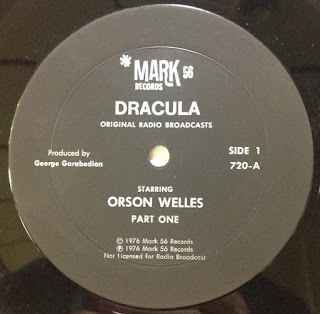 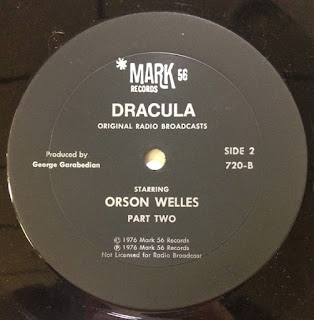 "There is no horror here that we don't create ourselves."

Ok so it has shades of Alien, but with James Cameron as 2nd unit director and Production Designer, I'm ok with that. This one takes a while to...er...take off, but greatly improved my mood as it went along...

*soft spoilers* There's a blue-haired Grace Zabriskie (I loved her as The Crone in Charmed among many other things); a baby-faced Robert Englund on the precipice of horror legendry; wise ol Mr.Hand (Ray Walston), a handsome and spry Sid Haig tragically playing a mostly-silent badass--who gives new meaning to dying by his own hand. And little Joanie Cunningham (Erin Moran of Happy Days) as a verified Space-Psychic-Sensitive that loses her head.

All this plus lots of fun (Alec Gillis) creature effects and even an existential lesson too. Long live Roger Corman!
Update: While searching for an acceptable image of the hilariously awesome cover (before using my own VHS copy, above) I found THIS:
Being that I am in the horror soundtrack community, I cannot believe this one snuck past me but there it is. Released in 2018 by Pure Destructive Records, it looks to be an elusive one...
Want more VHS? I've got lots more in my shop in the VHS Category.

A newbie Trekkie, and at my age... Don't be absurd, of course I have seen the original series, and the first 5 films. But this blog series documents the highlights of my long journey into strange new worlds, new life and new civilizations. Join me, won't you?

It was at this point that I made the executive decision to go all in on Star Trek TNG. Yes, it really did take 10 episodes for me to fully commit. As daunting as 176 episodes seemed, they are flying by at warp speed.

But this episode, Haven, was where I began to really enjoy the characters, and see the potential for what was to come. The humor, the silliness came along at precisely the right time for me, the current state of the world being what it is.

This episode is the first of several featuring Majel Barrett playing the mother of Counselor Troi. And I'm only today years old at learning that not only has she been in various Star Trek episodes from the beginning of the original series, she was also Gene Roddenberry's wife. Wow!

Stay tuned for a new Tales From The TNG Trek installment every Saturday. As of this writing, I'm nearly through Season 3 and have several posts coming up to commemorate my favorite--or at least noteworthy--episodes.

This week's book feature is Ghosts from the Mist of Time by Ronald Chetwynd-Hayes. He is one of my favorite British authors of the past. Most all of Mr. Chetwynd-Hayes books are VERY RARE, and incredibly difficult to find. $65 shipped within the US. 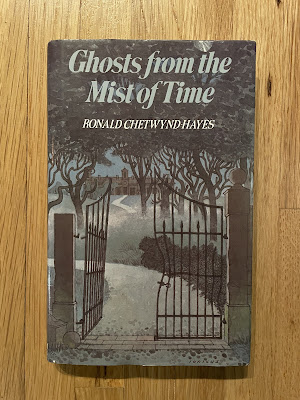 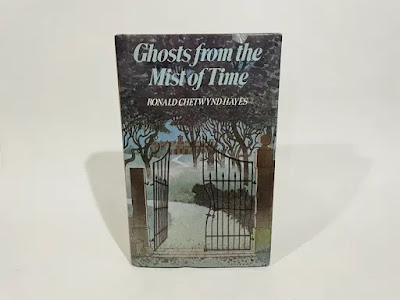 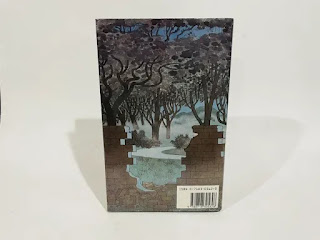 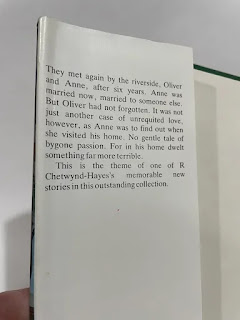 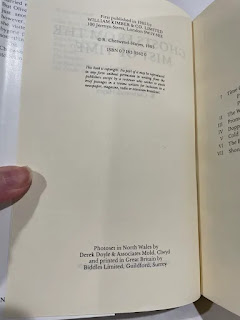 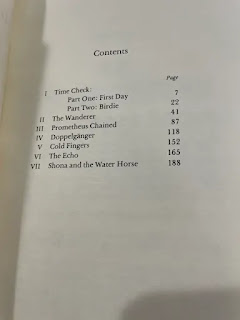 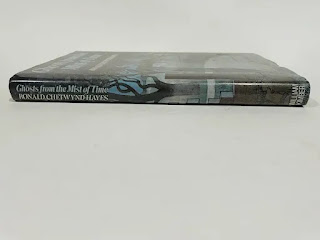 1985 UK first edition hardcover in very good condition for its age. Dust jacket has minimal corner wear/bumps only. All inside pages are clean and unmarked. Binding in great shape. A real beauty!
Books come from a smoke & pet free home.
at Thursday, April 14, 2022 No comments:
Email ThisBlogThis!Share to TwitterShare to FacebookShare to Pinterest
Labels: 1980s, Feature of the Week, Vintage Books

So Why The Sudden Change? 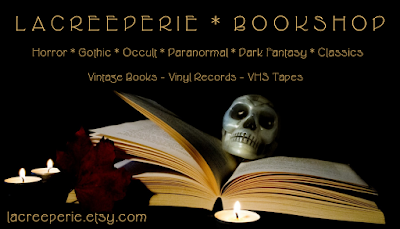 This month, I initiated a sudden brand change on my unsuspecting public. It had been a long time coming, I've been wanting to expand upon the products I offered for sale, and incorporate my new interests under a wider umbrella. Hence, LaCreeperie has become Time Travel Media...with the exception of the Etsy Bookshop, which will remain intact for now.
You see, a couple of years ago I became vastly interested in the cosmos, space travel, aliens and UFOs and all that that entails. I'm even warming up to Science Fiction, as it's rapidly becoming closer to Science Fact by the day. (Stay tuned for a recurring blog series chronicling my favorite Star Trek TNG episodes as I watch them for the very first time ever). 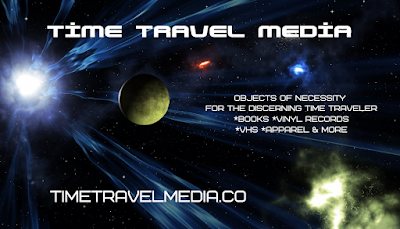 The way I see it, those of us who relish content from (what we consider to be) the past are time travelers. We cozy up in our little escape pods and immerse ourselves into stardates other than the ones we in which we currently reside. Then again, research tells me that all time; be it past, present and future--as we understand it--exist concurrently. So who's to say me and my fellow 80's fanatics are stuck in the past?
Regardless of outcome, change is always a good thing. And I've done my fair share of experimentation since opening LaCreeperie as an Instagram-only bookshop in 2014. I am integrating that format once again, as a response to the marketplace platforms which continue to demand higher percentages of our meager profits, and instigate stricter rules and parameters for selling. Enough. I have been in this game for over 20 years, and it's time to go back to the beginning where the process was much simpler and straightforward.
I hope you'll join me in this not-so-new venture, I have many great things to show you now that all of the formats are in place. Prepare for orbit and...engage!